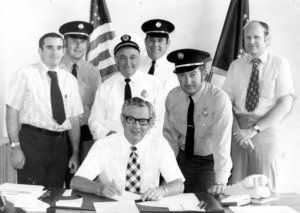 The Klamath Basin Firefighters Association started in 1946 in the city of Klamath Falls. These dedicated firefighters took a chance in forming their organization: the International Association of Fire Fighters (IAFF) Local 890 without the legal protection that we have today. Firefighters during those days were paid below poverty levels and qualified for state assistance. Protective gear was non-existent or in such poor condition that it was of no value.

In 1976 the Oregon legislation voted in the Public Employees Collective Bargaining Act. The first contract was a difficult process with threats of arresting firefighters for bargaining. We have come a long way since that time, but still, struggle to improve the lives of firefighters.

In 1986 an association was formed with Klamath County Fire District #1. After years of mismanagement of the Department, the firefighters worked together to get a new Board of Directors and turn the department around and the association was formed as IAFF local 3047. In 1992 the two departments merged into Klamath County Fire District #1, thus, the two associations merged into one. It was a rough road at the time with two contracts to resolve differences. We adopted the local IAFF number 890 from the city fire department and the contract of IAFF local 3047. Firefighters from both departments lost something in this transition. In 1998 the Department took over the ambulance service from Merle West Medical Center. Some say it was not profitable so the hospital dumped the service. Others say it was due to the Paramedics organizing to secure wages and benefits that did not change at the employer’s whim. Regardless of the underlying reason, they became dual role firefighters and paramedics, increasing the capabilities of the department.

Today we strive to improve the skills and health of all members. We look to the national standards, not local opinion as to the direction of the fire and EMS services. There is an inherent risk with this occupation but we make every effort to reduce or eliminate the risk.

A Shift
B Shift
C Shift